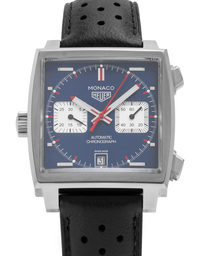 
Motorsport is in the name of the watch already, and the thought of the Formula 1 race in Monaco makes it taste like gasoline. Derived from these brilliant races is the name of the TAG Heuer Monaco series, which was launched in 1969. It is striking – especially newer models are available in rich colours, but also vintage mdoels of the TAG Heuer Monaco are very distinctive with their square dial.

The watch has a finely graduated dial, an integrated automatic chronograph and an additional date display. The Monaco embodies the racing more than any other watch, at the latest after watching the movie "Le Mans", the crystal clear. Speaking of glass: The processed sapphire crystal of the watch is anti-reflective on both sides so that the time remains readable even in strong sunlight. 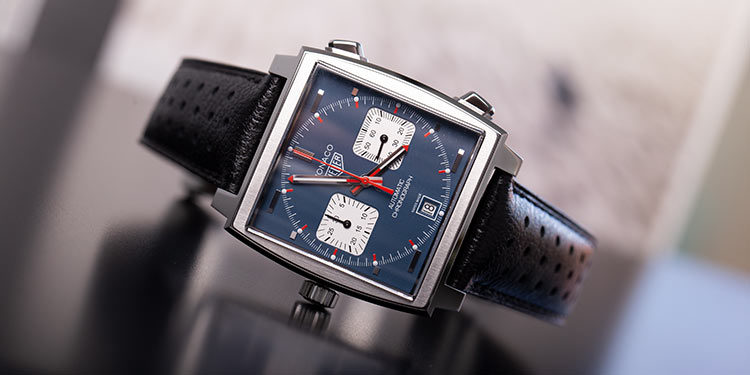 Variants of the TAG Heuer Monaco 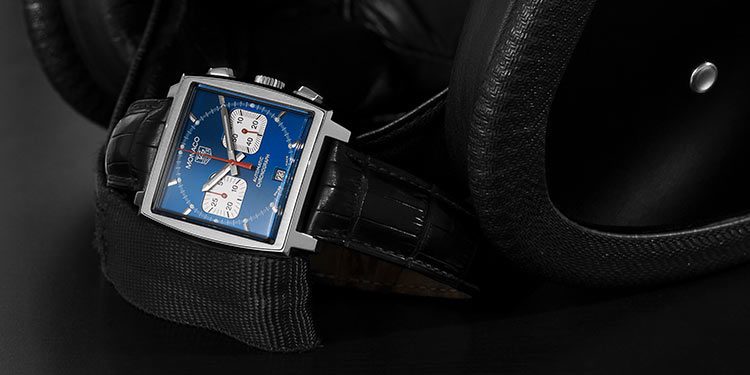 The story of the TAG Heuer Monaco

Founder-great-grandson Jack Heuer is a self-confessed motorsport and watch enthusiast. He soon had the idea to unite these two passions, so the idea for the TAG Heuer Monaco was born. A watch designed to appeal equally to both racers and watch enthusiasts, a watch that should embody motorsports in the future. The square case made the watch very unusual for the standards of the time, but this did not detract from the success of the TAG Heuer Monaco. On the contrary, it sets itself visually still today from other watches and fascinated by not only lovers.

At the latest in 1970, the big breakthrough came in the motorsport movie "Le Mans" Steve McQueen plays a race car driver, on his wrist is clearly recognizable to see a TAG Heuer Monaco. Its unusual case attracted the attention of every viewer, making the creator Jack Heuer one of the first product placements in an international format film. After the merger with the TAG group (Techniques d'Avant Garde) in 1985, in 1998 a tribute to the original model of the Monaco was made, the Monaco Steve McQueen Edition.

Optically almost identical is the further development inside the watch. Originally the chronograph calibre 11 breathed its life, then a groundbreaking achievement: it was one of the first automatic chronograph calibres. The reissue was operated until 2009 with the TAG Heuer Caliber 17, since then it is offered with the revised Monaco Caliber 12. Since its launch, the TAG Heuer Monaco has stood for daring and precision. It reflects pure racing, and it is these skills that can make the difference between winning and losing in motorsport. TAG Heuer continues to set new standards along this line – and recently developed the first belt-driven watch: the Monaco V4. The company's philosophy of sporty elegance and timeless aesthetics embodies the TAG Heuer Monaco with surprising elegance.

Many have succumbed to the rebellious charm of TAG Heuer Monaco, including some of the big Hollywood stars. Brad Pitt was the corporate face of the company for a full six years, wore various models – but he liked the Monaco himself, which he still owns and wears regularly. After Brad Pitt, a not less famous face took on the task: Leonardo DiCaprio became the new brand ambassador. Together with him, TAG Heuer even released a limited edition of 1,550 copies of the Link series, the "TAG Heuer Link Automatic Chronograph Leonardo DiCaprio Limited Edition". Another icon of film history is Samuel L. Jackson. Known from countless films and series, he also enjoys wearing the TAG Heuer Monaco.

But not only actors or athletes love the Monaco. Ever since the company was founded, TAG Heuer has been involved in the world of motorsport: The company supports world-famous athletes such as Patrick Dempsey and Tom Brady, as well as the McLaren Formula One team. Today TAG Heuer is one of the world's leading motorsport partners. As the official timekeeper of many well-known races, including the FIA World Touring Car Championship and as official team performance partner of Red Bull Racing, the company's distinctive logo is often seen at sporting events.