The Omega De Ville Prestige is the essence and memory of the De Ville series and represents its origin. Thus, vintage is the focus of this series. But that doesn't imply that you have to miss out on Omega's innovative spirit.  More 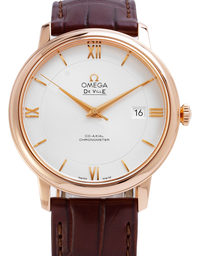 Experience all the variations of Omega's most popular dress watch

The De Ville was launched around 1960 as part of the Seamaster series and was named one of Omega's official dress watches. In 1967, it was separated from the Seamaster series and given its own listing in the catalog. From there, the De Ville series has developed its very own history and tradition, leading to numerous sub-series. Imagine the De Ville Prestige series as an exclusive lexicon with 247 different references, where you can read about the development of the De Ville series and experience it on your wrist. It' s easy to lose track with so many choices. For a basic overview, the De Ville Prestige collection can be divided into four sub-series:

Vintage, but not Outdated

The models in the De Ville Prestige series are similar in size and profile to the older Omega models, making them particularly suitable for narrow wrists. The cases range from 36 to 39 mm in size. The vintage feel is also reflected in the workmanship: the transition from the satin-finished look to the highly polished case is somewhat more pronounced here than what one is used to from the integrated styles of more recent Seamaster models. The dial is available in various color and embellishment combinations. It can also be equipped with diamonds, depending on the model and availability.
An automatic movement is standard inside these models – the Omega caliber 2500 – which based on the caliber 1120 that was introduced in 1994 and is a very stark modification on the ETA2892-A2. Omega also offers a more affordable sub-series of the De Ville Prestige series, which runs on quartz movements.


Discover other series by Omega

Orbis International is a non-governmental organization (NGO) that was founded in 1982 and is dedicated to the treatment and prevention of blindness and visual impairmentin disadvantaged regions and developing countries. In addition to long-term collaborations with local hospitals, Orbis also has a plane, which has been converted into a flying eye hospital. Orbis has been active in up to 92 countries, including Ethiopia, Bangladesh and Vietnam. Omega began supporting Orbis in its mission in 2011 by designing a teddy bear as the official mascot for the dials of the Orbis models. This is just one of Omega's many social commitments. The company is also involved in marine conservation and supporting solar energy.