The Carrera Calibre 1887 offers you modern design and the familiar precision of TAG Heuer. See for yourself!  More 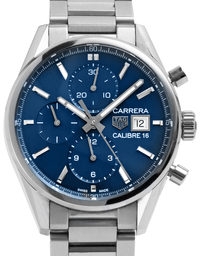 Celebrating its 55th anniversary in 2018, the Carrera series is probably the one that comes to mind most often when you think of TAG Heuer. A major contributor in ensuring that racing driver's watches are as popular and reputable as they are today, the TAG Heuer Carrera has continued to evolve over time. One thing that hasn’t changed is its vintage charm and the desire for top notch readability through a clearly made dial. Since 2009, the TAG Heuer Carrera Calibre 1887 Chronograph has also tried to live up to these same qualities.


Visual and technical features of the Carrera Calibre 1887 Chronograph

The dial design of the TAG Heuer Carrera Calibre 1887 Chronograph is based on that of the Grand Carrera. The totalisers located at 12 and 6 o'clock have been decorated with concentric circles, which contrasts with the smooth finish of the dial, giving it more depth and volume.

The philosophy of the Carrera is also reflected in its commitment to a simple and minimalist design and optimal readability. The three totalisers include a small seconds, 30-minute and 12-hour display. The Carrera Calibre 1887 also has a date aperture with a quickset function. The Calibre 1887 used as the basis for an automatic movement with a 50-hour power reserve, while the built-in column wheel provides precise start and stop functions as well as smooth operation of the pushers. Thanks to a vertical clutch, you can also use the chronograph function for longer without damaging or wearing out the movement. If you often rely on the chronograph, the power reserve is almost 40 hours.

This technical masterpiece of the movement can also be seen at work through the transparent back cover. At 17 mm thick and 43 mm wide and a polished stainless-steel case, the TAG Heuer Carrera Calibre 1887 is characterised by its sharp, masculine lines and sporty design. The bezel is rounded at the sides, allowing the watch to fit easily under shirt or suit cuffs. The crown is not screwed in, but instead uses a traditional push-pull mechanism. Despite this choice of seal, the watch is still water resistant up to 100 metres.

A pre-owned TAG Heuer Carrera Calibre 1887 could prove to be a wise investment, as the models in the series tend to retain their value well even when the market fluctuates considerably. In particular, vintage Carrera models can see slight increases in value every now and then.


The story behind the Calibre 1887

As indicated by the use of the Calibre 1887 name, the watches are equipped with this well-known component, which is the fourth movement manufactured by TAG Heuer and follows on from the Calibre 360, Calibre S and Calibre V. How “in-house” the calibre 1887 really is though is a matter of debate, as its history is somewhat turbulent. TAG Heuer had secured exclusive European rights to Seiko's TC87 movement and patented the design in 1997 to use as the basis for the Calibre 1887. TAG Heuer started with the Seiko 6S37 column wheel chronograph and adapted it to suit their needs. For example, the company changed the position of the column wheel, made the entire movement flatter and redesigned the bridge and the architecture of the oscillator, to name a few changes.

TAG Heuer has always been transparent in its approach and has also publicly announced that it has an official business relationship with Seiko and that some parts of the Calibre 1887 were purchased from the Japanese brand . There are 22 suppliers involved in the production of Calibre 1887, of which Seiko is the only company not working in Switzerland.