When a company breaks new ground, it can lead to real success. With the Aquatimer Collection, IWC are expertly proving this.  More 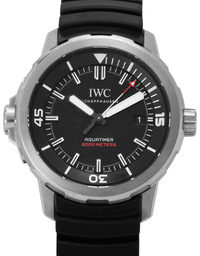 For more than 50 years of production, IWC Schaffhausen has managed to strike a balance between consistency and innovation with the IWC Aquatimer. The biggest change in the design of the IWC Aquatimer took place at the end of the 1960s, when a more angular shape was chosen for the case. Since the 90s, this shape was abandoned and the original shape of the first model from 1967 was adopted again.


The high technical standard and the willingness to constantly work on improving their own models make IWC Schaffhausen a company that likely has a few surprises in store for the future. The fact that the prices of a pre-owned IWC Aquatimer decrease due to the many new models released is, however, a common misconception. The classics of the series are extremely popular with collectors. Aquatimer models are considered to be "keepers", i.e. watches that the owners keep for themselves and which are rarely found as vintage pieces on the pre-owned watch market. 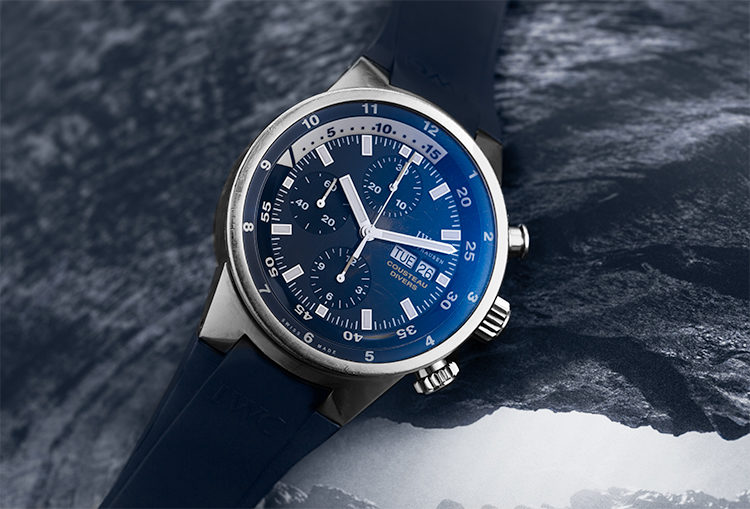 Technology of the Aquatimer watches

The movements of the Aquatimer have constantly been improved and designed to meet increasingly demanding tasks. At this stage, we would like to give a special mention to the Pellaton Winding System, which is named after its inventor, the technical director of the Schaffhausen manufactory. In this rotor, an eccentrically mounted disc drives the rotational movements, as they are generated by the movement on the arm of the watch wearer, into back and forth movements like a seesaw. These movements are then transmitted to the winding wheel by two rollers. This means that even the slightest movement can be used to apply force to the spring. This patented process is still state-of-the-art 60 years on and is used in models by Patek Philippe and Seiko among others. 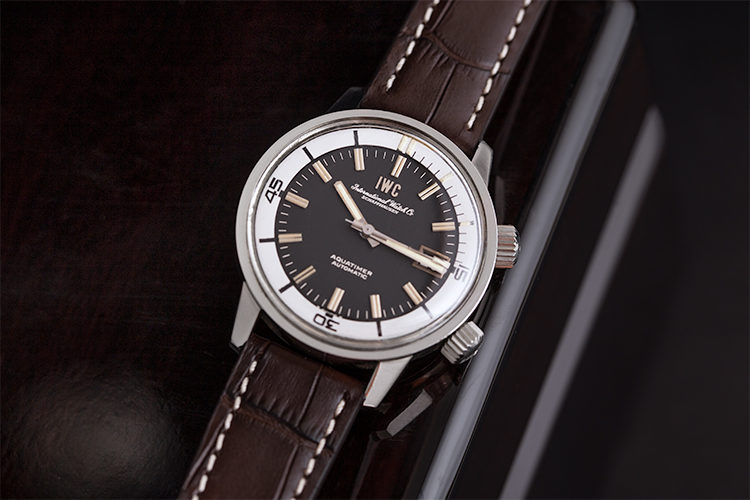 The history of IWC diving watches

The first time IWC attracted attention was in 1936. It was back then that the company launched the first wristwatch specifically designed for pilots. Looking at the history of large companies, you can often see that they never rest on their laurels though. The advantageous location of the production site on the Rhine inspired IWC's engineers and designers to expand the product range to include diving watches such as the IWC Aquatimer.

The first known design drawings of the model can be traced back to 1966. In 1967, the first Aquatimer from IWC was presented at Baselworld. This new model impressed with two special features: the Aquatimer was water-resistant up to 200 metres and had an inner bezel under the glass of the dial. In addition to being able to precisely determine the diving time, there was no longer any danger of water leaking through the outer bezel into the inside of the watch. Furthermore, the Calibre 8541 provided a high-performance drive mechanism. This and its successor, the Calibre 8541B were used in all Aquatimer models for the first 20 years, which corresponds to a total number of about 160,000 units. It’s no wonder that some experts call this movement one of the best Swiss movements ever made. Despite this great success initially, IWC had already decided to radically change the design of the Aquatimer by 1968. From then on, the models became Ref. 816AD and had cushion-shaped cases.

Then in 1974, the next reform happened: from this point onwards, the Aquatimer became Ref. 1816. The colour scheme of the models was radical: the main colours were red and blue shadow that merged into black around the outside of the dial. The professional diving watches on the other hand, still came with a black dial. The maximum water resistance also increased to 30 bar, which corresponds to a water column of about 300 metres. It was these consistent and specialised designs that helped IWC through the quartz crisis, when the market was flooded with cheap quartz watches. Never willing to sit back, the Ocean 2000 was then created in collaboration with Porsche Design. This was a highly specialised watch with a water resistance of 2000 metres.

In 2008, a new model of the Aquatimer was released, with the inner bezel back underneath the glass. This was the prelude to the launch of a vintage collection. In 2014, IWC presented additional new models in the Aquatimer collection. There was an Aquatimer watch with a perpetual calendar and a model called Deep Three, which has a spring membrane that measures the water pressure and provides information about the dive depth and dive time. These models, which were instant diver’s watch classics, also have an external-internal rotating bezel to prevent accidental adjustment of the bezel.

The Aquatimer Automatic IW329001 is the latest addition to the collection and has hands and indices coated with luminous paint to provide optimum readability even in poor lighting conditions. The short intervals between which new models have been released might suggest that IWC have far from finished their journey through the depths of the oceans through this model.


Discover the world of IWC collections