As a sporty and elegant diver's watch, the Aquaracer offers excellent quality at a reasonable price. It is available as a chronograph or 3-hand version with different calibers and case sizes and offers both exciting ladies' and men's models.  More 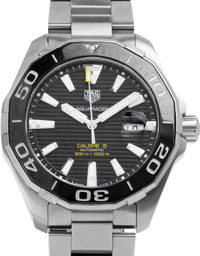 
The Watchmaster online shop offers you a great selection of certified pre-owned TAG Heuer Aquaracer models. If you have already found your favourite watch, you can choose between different payment options. If you would like to pay the full amount directly, you can do so conveniently online by credit card or via PayPal. If you prefer to pay in convenient instalments, you can alternatively choose to finance your TAG Heuer Aquaracer through one of our partner companies. Our customer service will be happy to advise you on the various options, and you can also find more information on our website.

The TAG Heuer Aquaracer is designed as a water sports watch, which can also be used in the professional field. Depending on the model, its depth varies between 300 metres and 500 metres. Within the series, there is a wide choice between chronograph dive watches and three-hand models, which are available with different case diameter and different calibres. Most models in the series feature six indexes on the unidirectional, 12-cornered bezel for better underwater grip. 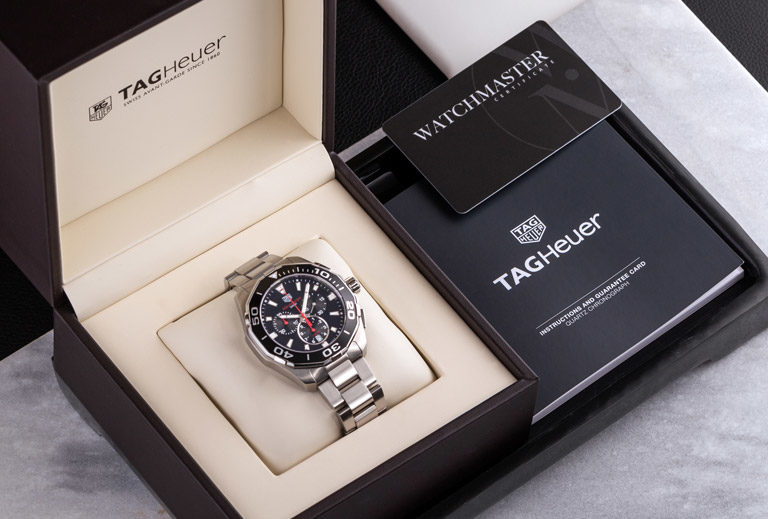 Interesting models of the TAG Heuer Aquaracer at a glance

The Aquaracer series is divided into divers chronographs and divers watches, which is divided into different models. Men's models in the current collection have a case diameter of 40.5mm to 43mm and are available in titanium, ceramic and stainless steel. Some use the TAG Heuer Caliber S electro-mechanical chronograph movement, which can measure hundredths of a second. The ladies watches of the current collection are as versatile as the men's series: they vary in diameter from 27mm to 35mm and are equipped with a 12-cornered bezel. They come with stick or diamond indexes and are waterproof at a depth of 200 metres or 300 metres. 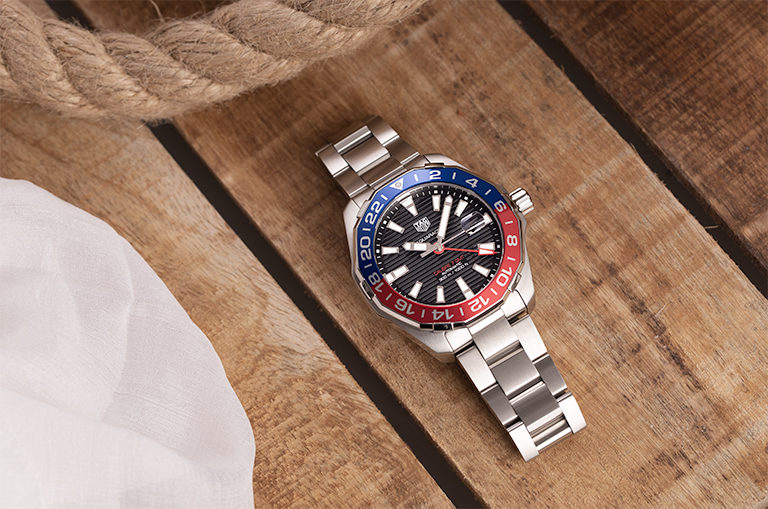 The history of the TAG Heuer Aquaracer

TAG Heuer has always been passionate about water sports. Back in 1895, the luxury brand launched the first pocket watch with a waterproof case. The TAG Heuer Aquaracer series is a professional water sports watch, which is in the tradition of its predecessor models, but by their appealing design, looks good even outside the waves. It was preceded by water sports watches for professional use such as the Yachting Timer, a regatta watch with countdown function or the Heuer Solunar, the first watch with tide display.

From 1982 on, the series 2000 went into production, a diving watch that is waterproof up to 300 metres diving depth. This is followed in 2002 by the Aquagraph series, which was available for the Navy Seals and was tested and used up to a diving depth of 500 metres. The experience with both watches provided the basis for the development of the Aquaracer. Launched one year later, the series is a push into the professional diving watch segment, which is both sporty and appealing.

TAG Heuer is aimed at stylish personalities who go their own way. The focus of their "Don't crack under pressure" campaign is on celebrities and public figures who, despite external pressure, perform excellently and regularly cross their own borders. Famous faces like Gigi Hadid, Chris Hemsworth and Cara Delevingne promote the campaign. The Aquaracer joins this tradition. While their models can withstand all diving depths of at least 300 metres, they also withstand the enormous pressure underwater at the same time. A special screw connection allows for optimal performance in any environment.


Other interesting series from TAG Heuer