The Breitling Aerospace Evo is a further development of the 1985 launched Aerospace. The multifunctional, innovative chronograph is characterized by its hybrid display. The latest digital features combined with classic analog hands delight lovers and adventurers.  More 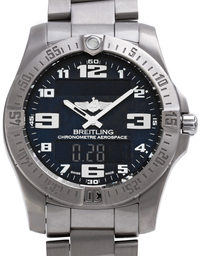 In the onlineshop of Watchmaster you will find numerous certified, used luxury watches like Breitling Aerospace Evo. The purchase of used watches makes a lot of sense not only from a financial point of view, often you will find models that are now completely unavailable. Straight from the history of the Breitling Aerospace Evo shows, you can buy an aerospace only second-hand, since it is no longer manufactured by Breitling. All watches in Watchmaster's online shop are refurbished both technically and visually - their authenticity is certified. We give you a two year warranty!
Once you have found your Aerospace Evo, you can conveniently pay by credit card, PayPal or bank transfer. Alternatively, we also offer flexible installment payments. So you can plan your investment individually and finance your new Breitling Aerospace Evo. For more information about buying and financing used luxury watches, visit our website or contact our customer service!

The history of the Breitling Aerospace Evo

You do not have to go far to be able to say that Breitling has had a close connection to aviation for a long time. This is reflected among others in the Breitling Navitimer and Breitling Chronomat, which are among the most famous pilot's watches in the world. In 1985, the company built on these values and launched a modern collection of high-precision chronograph quartz movements and the Breitling Aerospace was born. Originally the Aerospace belonged to the Navitimer family, but it was not only intended to meet the needs of pilots, but also to establish itself among watch enthusiasts, aviation fans and celebrities. With its then almost futuristic design, which was mainly due to the hybrid dial, the watch quickly made a name for itself as a "tool-watch". Today the Breitling Aerospace is considered a trailblazer for many professional electronic aeronautical watches such as the Breitling Emergency.
On the dials of the first models was still the name "Navitimer", which was then later replaced by "Aerospace". The reoccuring facelifts are a known feature of the Breitling Aerospace,. Until 1996, these facelifts were kept discreet.
In 1999, the series was certified by the Contrôle officiel suisse des chronomètres (COSC) - a major milestone for the series: Breitling Aerospace watches are now officially Swiss precision watches. Since 2001, the Aerospace has been equipped with the Breitling patented SuperQuartz ™ movement. It can be found today in all electric Breitling watches, because it is one thing above all else: Up to ten times more precise than a conventional Quartz movement. Thus, Breitling watches stand out clearly from the mass of quartz watches.
In 2005, Breitling launched the Aerospace Avantage - the signature on it ́s dial says "Chronometre Certifie". This underscores again the certification by the COSC. Since 2007, the model was named again Breitling Aerospace. This is clearly recognizable by the words on the dial "Chronometre Aerospace".
In 2013 Breitling presented for the first time the current model of the series, the Aerospace Evo. Equipped with the Breitling SuperQuartz™ movement, it also meets the highest standards of precision - this makes it a worthy successor to the Aerospace. Because this watch is no less than that! Then the Breitling Aerospace was replaced in 2013 by the Aerospace Evo and is no longer available. The Breitling Aerospace Evo demonstrates the innovative spirit of the brand and proves to be a perfect companion in all situations.

The optical and technical peculiarities of a hybrid

The most outstanding feature of the Breitling Aerospace Evo is certainly the hybrid face, which features classic analogue hands as well as a digital display. Of course, this hybrid does not lack the classic complications of a chronograph. The crown can be used to control special functions such as timer, alarm, minute repeater or a second time zone.
The 43 mm titanium case combines two special features: It is lightweight, yet extremely robust. Without a bracelet, the weight of the watch is less than 50 grams. The bezel, also made of titanium, has the characteristic four riders, which make it much grippier and at the same time serves as a protection for the watch crystal.
Speaking of protection, the case bottom of the series is screwed in tight and thus ensures a proper protection against ingress of up to 10 bar water pressure. The multifunction chronograph is powered by the Breitling SuperQuartz™ movement. It is ten times more accurate than an ordinary quartz movements, the Aerospace Evo therefore convinces with an incredible accuracy. It is available in a variety of color and material combinations, such as the dial colored in plain Volcano black, classic Mariner Blue or trendy Tungsten Gray. Compared to the colors the choice of bracelets is no less great, you have to make a decision between the latest titanium bracelet, a practical rubber bracelet or a fashionable leather bracelet.

How known is the Breitling Aerospace Evo?

The Breitling Aerospace Evo is very popular. But not only the hearts of aviation fans and watch lovers are lost to that model. Hollywood stars like Brad Pitt and Harrison Ford call a Breitling Aerospace their own. Slightly less known is that Breitling luxury watches are also widely used among musicians. Bob Weir, guitarist and sawman in "Grateful Dead", for example, Axle Rose of "Guns'n'Roses" and Lou Reed were seen several times with an Aerospace Evo on their wrists.